The Lost Hero by Rick Riordan

Jason wakes up on a school bus and finds he has no memory.  No memories of Leo and Piper (his supposedly best friends), and no memory of why he was on the school bus in the first place.   Jason learns that he is on the bus for a class field trip to the Grand Canyon, which is perfectly normal. Wrong. Things get weirder when their P.E. teacher is taken by a whole bunch of monsterous venti (Wind Spirits)  When a rescue party comes flying in, (literally flying) Piper, Leo, and Jason demand  answers.  In return they are taken to camp half-blood, where they are informed they all are really half-human, half-greek god. They find out that Jason's memory was stolen by Hera, queen of heaven.  In return for the memories Jason, Piper, and Leo must go on a quest for Hera, to rescue her and stop the Giant King. Will the quest be too dangerous? Will any of them survive? Or will the Giant King destroy the world?

is an action-packed adventure story.  Authored by Rick Riordan, who is a favorite of mine.  And after you read The Lost Hero, he'll be your favorite too.

Among the Hidden by Margaret Peterson Haddix 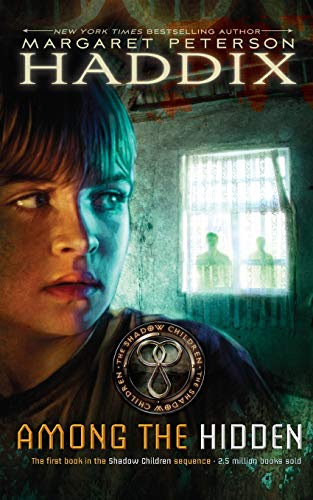 Luke has been in hiding nearly all his life.  He has never gone to school, had a birthday party, or even had a friend.  All of this is because the Population Police, the guys who made the law that third children are illegal.  And you guessed it, Luke is a third child.  But one of the neighboring houses next to Luke, has a light on.  And Luke knows that the family has only two children, and no one should be at home.  Luke dares to sneak outside and into the house with the light,  and in there is a girl.  Another third child named Jen.  Jen has a plan to overthrow the Population Police, and encourages Luke to be part of the scheme.  But will the plan be too dangerous? Will Luke and Jen survive? Find out in Among the Hidden!

is an amazing, suspenseful, mysterious book.  With characters and a plot so amazing, it feels like your actually part of the story.

Young Bibliomaniac gives Among the Hidden 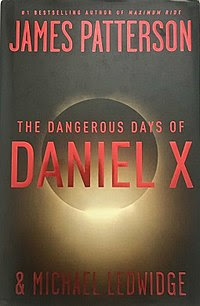 4 STARS!
Posted by Young Bibliomaniac at 12:14 PM No comments:

Journey to the River Sea by Eva Ibbotson

When young orphaned Maia is sent to live with the Carters in the Amazon, she dreams of a happy life.  But dreams can't always tell the truth.  The Carters are horrible, Beatrice and Gwendolyn (A.K.A, the twins) only care about themselves.  Mrs. Carter is the same, and Mr. Carter is shut in his office all day.  To Maia living with the Carters is like a prison.  That is,  until she meets Finn, an adventurous runaway with two detectives on his trail. The crows, as Maia calls them, are trying to catch Finn and take him to his wealthy  grandfather. Can Maia help Finn escape the crows?  Can Maia escape the Carters? Find out in Journey to the River Sea


Journey to the River Sea

is a GREAT mystery full of suspense, friendship, and adventure.  You'll wish it would never end.

Dizzy Fantastic and Her Flying Bicycle by Andy Hueller 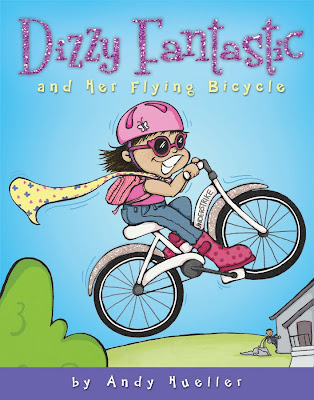 While trying to escape her neighbors rabid dog, T-Rex, Debbie finds out her new Thunderstrike bike can fly and she safely returns home.  Then Debbie decides to become Dizzy Fantastic, the towns undercover superhero, defender of the good, oppressor of evil. And while doing that, Debbie hopes to make friends too. But do superheroes have time for friends?

Dizzy Fantastic and her Flying Bicycle

is a good book for both girls and boys. I have to be honest here.  I didn't want to read this book at first, but then my mom persuaded me to give it a try, and it turned out to be pretty good.  Dizzy doesn't alway feel like she fits in, and that's something we can all relate to a little, right?

A Door in the Woods (The Jimmy Fincher Saga: Book One) by James Dashner 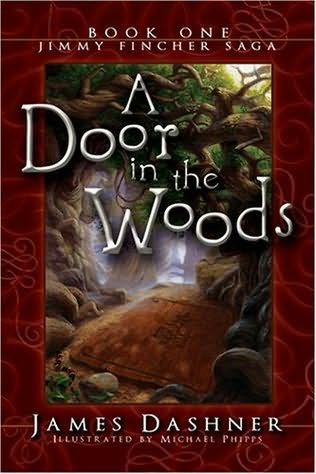 This whole story starts with a door, a door lying on the floor of the forest.  There are many trying to get to that door because behind it is a power that can destroy our world, and others.  It's up to Jimmy Fincher to stop them.  Jimmy Fincher used to be a normal kid, then he got kidnapped by a bunch of monsters and was told that they were going to get the power behind the door.  With that power they would combine our world with theirs.  And that would be bad.  Jimmy knew he had to stop the monsters but would he be able to?  Would he find the courage to enter the door for himself?

A Door in the Woods

is the bomb. I read it in one day it was so good. I know you'll enjoy James Dashner's writing as much as I do.

Young Bibliomaniac gives A Door in the Woods 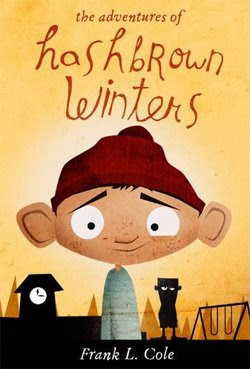 5 STARS!
Posted by Young Bibliomaniac at 8:24 AM 4 comments:

Summer of the Monkeys by Wilson Rawls

The last thing Jay Berry expects to find this summer is a tree full of monkeys, and he pays little attention to them. That is, until he finds out those monkeys are worth big money.  Just enough money to buy the .22 shotgun and horse Jay's been wanting since he can remember.  But the monkeys will stop at nothing to keep from getting caught. Can Jay Berry catch all the monkeys and get the prize money?  Will he finally get the horse and shotgun he's been dreaming of?

Summer of the Monkeys

is the only book that ever that made me cry. It's one of the best books I've ever read.  Considering I'm a boy and I don't usually cry, it must be.  Summer of the Monkeys

may even be better than Where the Red Fern Grows

The Tale of Despereaux by Kate DiCamillo

Despereaux is the youngest in a mouse family.  He is different than the other mice, he does not scurry or cower or do anything else a normal mouse would do.  One day while trying to learn how to scurry, Despereaux meets Princess Pea and instantly falls in love.  Unfortunately it's a big no-no to fall in love with a human when you're a mouse.  Despereaux finds out that Princess Pea has been taken down to the dungeon by an evil rat and he knows is the only one who can save her.  But can he?

I first read The Tale of Despereaux

when I was in second grade and I still read it often. I know you will too.

For Boys Only: The Biggest Baddest Book Ever by Marc Aronson and HP Newquist 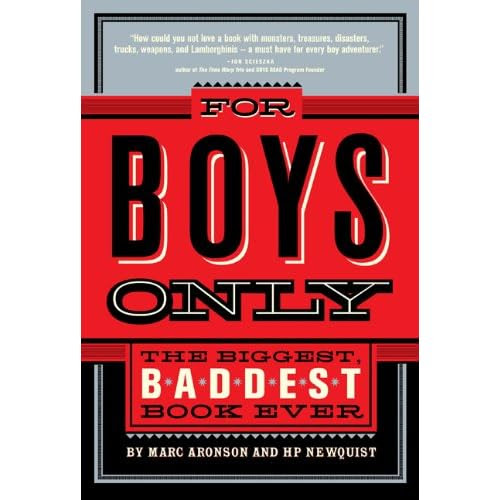 Want to know how to land a plane, hunt Sasquatch, and even make blood? Well this book has it all. Marc Aroson and HP Newquist's [The two geniuses who wrote this book] writing is amazing. Everything a boy wanted to know is crammed in here. Literally.

For Boys Only: The Biggest, Baddest Book Ever

is a great book for boys of all ages.  If you're a boy, you'll find the information in this book helpful.  Especially if you plan on hunting a Yeti anytime soon.

Young Bibliomaniac gives For Boys Only: The Biggest, Baddest Book Ever

The Wonderful Wizard of Oz by L. Frank Baum

When a huge cyclone flies Dorothy's house to the wonderful land of Oz, Dorothy must go to the great wizard of Oz and ask him to send her back to Kansas. But to get to the great wizard, Dorothy must go to the Emerald City, along with her four companions the Tin Woodman, the Scarecrow, the Cowardly Lion and her little dog Toto.  On their way to Emerald City Dorothy and her friends must overcome many obstacles.  There are winged monkey's, deadly poppies and the Wicked Witch standing in Dorothy's way of getting home.

The Wonderful Wizard of Oz

is a classic, easy read great for all ages.

The Miraculous Journey of Edward Tulane by Kate DiCamillo

Edward Tulane is a doll, a rabbit made of china.  He is loved by his owner, Abilene, and has a perfect life. Abilene's family go on a ship headed to London and Edward is accidentally thrown overboard. Fortunately, he is brought out of the sea by a fishermen but his journey doesn't end there.  As Edward travels around the world searching for Abilene, he discovers the meaning of love.

The Miraculous Journey of Edward Tulane

is on of my all-time favorites. I know you will love it as much as I do.

Leven Thumps and the Gateway to Foo by Obert Skye 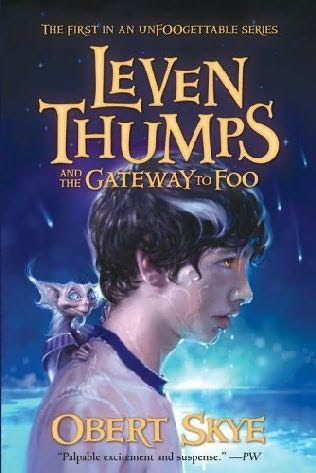 Leven Thumps is a normal kid, kind of. OK, Not really. His parents hate him along with basically every other person on the planet. That is before he discovers Clover, a cat-like creature called a sycophant. Clover convinces Leven to come to Foo, a totally different world. Oh and he has to save our world from some crazy lunatic named Sabine.

Leven Thumps and the Gateway to Foo

is funny and full of suspense with every page you turn.
Young Bibliomaniac gives Leven Thumps and the Gateway to Foo

Mrs. Frisby and the Rats of NIMH by Robert C. O'Brien

Mrs. Frisby is a character to remember; she's brave and willing to do whatever it takes to help her son.  Mrs. Frisby and the Rats of NIMH

is mysterious and suspenseful and forces you to keep reading.

Young Bibliomaniac gives Mrs. Frisby and the Rats of NIMH

is a story about how one boy's summer lawn mowing business turned grass into cash.

When a 12-year-old boy's grandma gives him an old lawn mower for his birthday, he decides to start a lawn mowing business. Because what else are you supposed to do with a lawn mower?  By the end of each week he makes five-hundred dollars. Lucky for him, one of his first clients is a stockbroker who offers to help him learn all there is to know about business, including investing-which can make a boy rich.  But all that money can get trouble involved too.  Big trouble.

is a quick read, I finished it within an hour.  I'm positive you'll love this funny book as much as I did.